Separating liquid constituents is an important procedure in industrial processes. From petrochemical processing to wastewater treatment to pharmaceutical manufacturing, having a safe and effective method for removing compounds is important to ensure a clean and environmentally safe byproduct.

Distillation is the most common way to remove contaminants from wastewater produced from industrial processes. As a liquid-liquid separation method, the goal with distillation is to separate a liquid mixture, also called the feed, into its constituents, isolating the desired product from various contaminants.

Within any liquid substance, such as wastewater byproduct from chemical and industrial manufacturing processes, there are many different chemical parts. Each chemical constituent has its own boiling point or volatility level, which differs depending on the nature of the substance.

How Does the Distillation Method Work?

The distillation process occurs in a column — a piece of equipment designed to contain the feed, apply heat to it, condense the volatiles and collect the separated constituents. In its simplest form, distillation equipment has three basic components:

Depending on the chemical properties of the feed itself and the desired product, the distillation column may differ in terms of its size and diameter, as well as the level of pressure inside the column and the temperature the mixture is heated and cooled to. All these variables determine how to construct a distillation column that’s appropriate for the type of feed being processed. As such, distillation columns can become exceptionally more complicated than the simple column described above.

Distillation works well on liquid mixtures that have a high relative volatility, meaning there is a significant difference in volatility levels between the product and its contaminants. Additionally, distillation can be used on any feed that has one or more components, making it useful in industrial settings where many contaminants affect the product.

To achieve the purest distillate possible, multiple feed containers can be set up in a row, increasing the concentration levels of the volatile in the mixture at each stage. Building a distillation column that allows for multiple stages of the heat-condense cycle improves the purity of the final product.

The distillation method of liquid separation is more difficult to achieve with mixtures that have a low relative volatility. When the chemical constituents have a similar volatility level compared to the product itself, it’s harder to isolate them through heat application because they have such similar boiling points. In this case, specialized techniques are needed to achieve greater precision. Substances with the highest boiling points can never be completely removed from the mixture, and remain as residue in the feed. As such, distillation can never achieve 100% separation.

What is the difference between stripping and distillation? The primary difference is in the method used to separate the feed’s constituents. While distillation uses heat to boil the volatiles into vapor and then condense and remove them, stripping uses the principles of absorption.

Absorption is the chemical process whereby molecules in a bulk phase — either a liquid or solid — are taken into a gaseous substance. When applied in the context of stripping, engineers use steam as the gas that absorbs liquid molecules. In a steam stripping column, the liquid molecules being separated from the feed get absorbed by the water vapor, effectively isolating them from the desired product.

How Does the Stripping Method Work?

All contaminant removal columns operate by the same principles — a column design that gradually separates constituents from the feed to be collected and removed. Though the distillation and stripping column methods are similar, they differ in a few key ways.

As the feed flows from the top of the column downward, it washes over porous packing material or trays designed to increase the amount of contact surface where the steam and the feed meet. As the steam gets introduced into the feed, the volatiles with the lowest boiling point will first be absorbed into the steam upon contact with it. Volatiles with higher boiling points won’t undergo this process, but if they have lower water solubility, they’ll still get absorbed into the steam and be removed with it.

The steam containing the absorbed compounds exits the top of the column, where it’s typically collected, condensed and purified. However, sometimes it’s released directly into the atmosphere if it is safe to do so.

Steam stripping is a vital process in petrochemical processing because it drastically decreases the number of pollutants expelled. Industrial processing facilities need to take serious precautions to prevent the off-gassing of volatile organic compounds (VOCs) into the air or water sources. Steam stripping is a highly effective method for achieving these environmental sustainability goals.

In addition to its benefits for the planet, steam stripping is also a highly effective method for removing VOCs compared to other methods — it achieves a 99% VOC removal rate or higher, depending on the design. While the distillation method is limited to the boiling points of each compound, steam stripping doesn’t have the same restrictions. Though steam stripping can’t absorb all organic compounds from the feed initially, a follow-up scrubbing process can increase the overall stripping rate.

Steam stripping is also a cost-effective long-term option. Because it doesn’t require massive amounts of energy to boil and cool the feed, the overall operational costs of stripping columns remain lower than distillation columns. This makes steam stripping a good investment for industrial plants processing large volumes of feed on an ongoing basis.

The primary disadvantage of steam stripping is the high initial investment cost. To maximize the efficiency of steam stripping, engineers need to design stripping columns to be very tall to accommodate many layers of packing or trays that increase the contact surface area between the feed and the steam.

The added costs of the required material and labor raise the overall cost of the stripping column construction, which can sometimes be a deterrent for enterprises looking to minimize upfront costs. However, the reduced operational costs over time due to lower energy consumption can offset the higher initial investment in a stripping column. 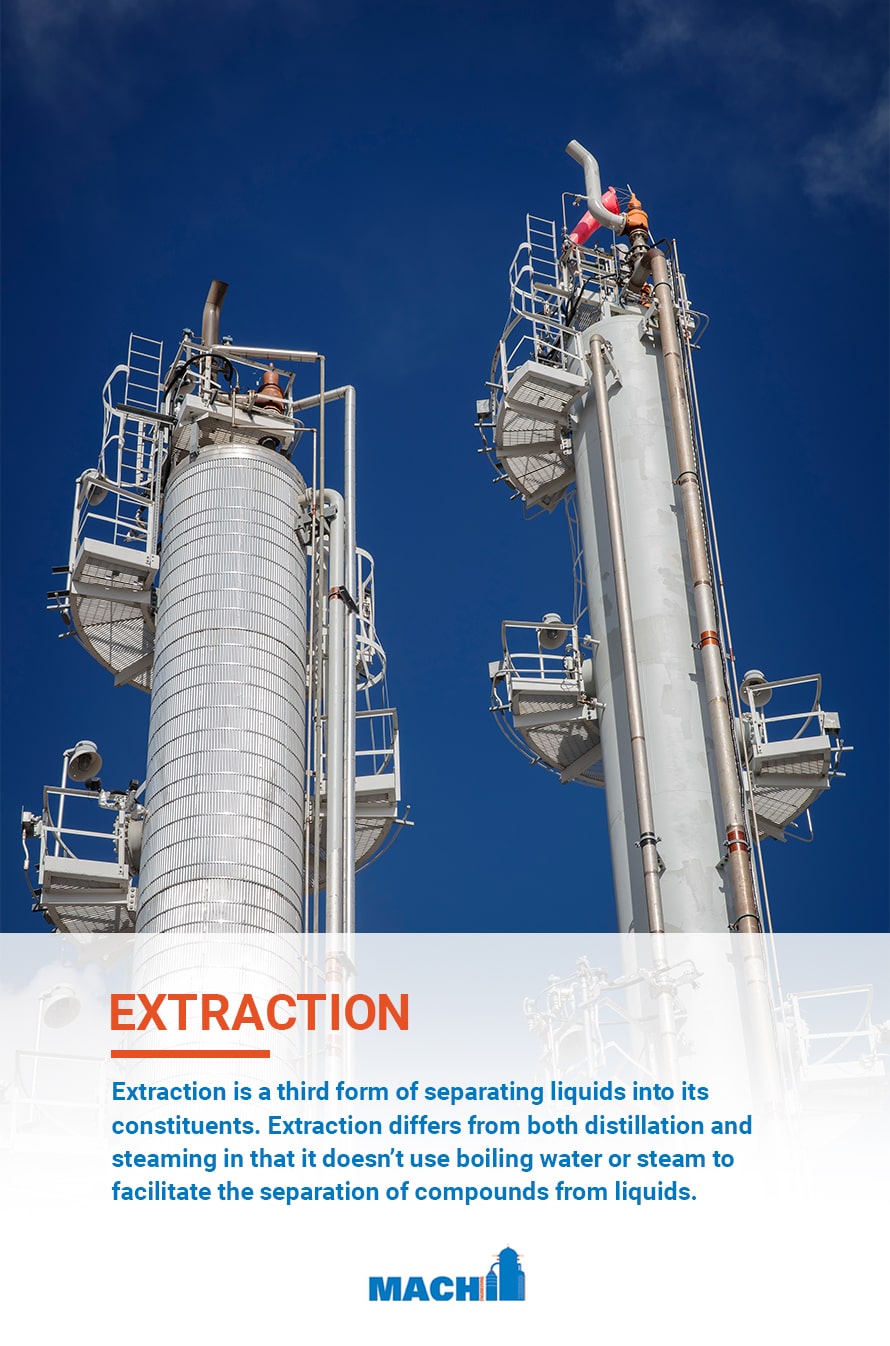 Extraction is a third form of separating liquids into its constituents. Extraction differs from both distillation and steaming in that it doesn’t use boiling water or steam to facilitate the separation of compounds from liquids. Instead, it relies on an existing chemical property of each substance — the solubility levels.

Every substance has a different water solubility level depending on its organic composition. Some substances, like minerals, are highly soluble in water, meaning they easily dissolve. Some chemical solvents used in industrial manufacturing have extremely low solubility, meaning they don’t dissolve in water.

How Does the Extraction Method Work?

There are a few different column extraction designs, but they all operate on the same principle. In an extraction column, the column contains the feed, the solvent is added and the constituents separate as the soluble molecules enter the solvent. Because the remaining feed is the heavier liquid, it flows down to the bottom of the column. The solvent is the lighter liquid, and it floats toward the top of the column, along with the solubles it has collected.

The column allows for the separation of the soluble-containing solvent layer from the feed layer, where the top solvent layer can be extracted from the desired remaining liquid. Extraction columns have no internal moving parts and instead contain internal mechanisms for dividing the feed into stages of dispersion.

There are three extraction column designs:

In many ways, extraction is a much simpler process of liquid separation than distillation or stripping. By adding a solvent, you allow the substances’ own chemical properties to do the work of separation. There’s no need for reboilers or condensers, and with no internal moving parts, extraction columns come with easier maintenance and less risk of breakdowns.

Simple extractors, like spray columns, are also relatively inexpensive to construct and operate since there isn’t much to the design or operation. There are also no enormous energy costs involved in their operation.

Sieve and packed columns can be highly efficient. The sieve tray column design, in particular, lends itself well to scaling up in size, meaning it can handle higher volumes.

The disadvantages of extraction columns depend on the design. Since there’s no internal mechanism to promote mixing, spray columns are considered an inefficient way to separate liquids, meaning they won’t serve high-capacity operations very well. Likewise, the packed column design is only efficient when there are limited stages involved, so it doesn’t scale well.

Despite the lower operating and construction costs, extraction columns require a sizable amount of solvent to operate in larger volumes. Solvents can be expensive in such large quantities, so this extra step adds to the cost.

At MACH Engineering, we know each business has different liquid separation needs. Our team of design engineers will develop a customized steam stripping solution that’s right for you. For more information on our design and installation services, contact us today.