Industrial processes that involve separation such as distillation, stripping and absorption are often performed in packed columns — also referred to as packed towers. These packed towers require liquid distributors that are used to evenly disperse the liquid in the tower over specific sections of the packing. This process makes for a more efficient and intensive mass transfer between the various phases — plus, it helps prevent maldistribution.

Benefits of a Liquid Distributor

The Different Types of Liquid Distributors

There are two main categories of liquid distributors:

An orifice type/pan liquid distributor — the most conventional type — allows gas to pass the plate through risers while liquid flows through openings in the floor. The standard design has a turndown ratio of 2:1 and the pressure drop in water is typically 0.2 – 0.6. If higher turndown ratios are required, taller risers can be used. This type of liquid distributor isn’t recommended for fouling applications.

Commonly used in stripper and scrubber services with moderate to high liquid rates, a ladder-type distributor or lateral pipe distributor can be used for a variety of applications, including conditions with limited space availability and high vapor velocities. It’s a pressure-driven liquid distributor in which the branch pipes serve to deliver the liquid through metering orifices. Generally, the pressure drop is 1-5 psi. Due to the potential for plugging of the orifices, a ladder-type distributor isn’t recommended for fouling systems — nor for systems with suspended solids or low liquid rates.

A spray nozzle distributor, or spray-type, can be designed for low liquid rates — sometimes as low as ½ GPM/ft2 of tower area. Generally, the turndown is 2:1 at a pressure drop across nozzles of 10-15 PSI. A spray nozzle distributor is predominantly used for refinery and heat transfer applications, and it’s important when short bed heights demand a uniform distribution pattern. They are not recommended for most distillation applications.

Benefits of Working With MACH Engineering for Your Liquid Distributor Needs

If you’re looking for custom liquid distributors and tower internals that meet your specific needs, we’re here to 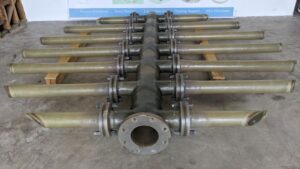 help. With more than 25 years of experience and a reputation of innovation and excellence, we work with you to determine which type of liquid distributor is appropriate for your application.

Once we have the exact specifications, we design your liquid distributor and run process simulations both before and after selecting the tower internals. Please contact us for more information.